Since the release of the ATR_BarColor Indicator ( see previous post ), I’ve been experimenting changing some parts of the logic and adding different conditions to improve the performance of the signals when trading this indicator as an automated system.

Lets make a review of how this indicator works ;
As we have described before, we are using a well known trailing indicator, known as SuperTrail, SuperTrend, MultiTrail, etc as a complete trading system, with entries, exits and reversals.
On the following example we can see the standard TIS_MultiTrail Indicator showing an up trend ( blue bars ) changing to a down trend ( red bars ) when the lower blue multitrail line is broken. The bear move finishes when the red upper multitrail line is broken. 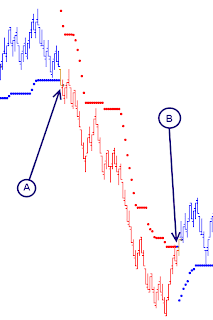 Used as Trailing stop, we exit the Long position on “A” and exit a Short Position on “B”.
If we want to use this Indicator as Trade Setup, now we need an entry signal. The most obvious entry is the same signal we use as exit ; for example we enter Short closing the Long at “A” and then close the short while entering Long at “B”.
This is a valid setup but it would be always in the et reversing positions, having very good winners while et moves, but the performance on sideways ets would be low, producing lot of reversals with small loses on each.
That was the reason of the creation of the ATR_BarColor Indicator, which adds a ( yellow bars ) after each trend change.
After a , it is required to break a pivot to produce an entry signal.
The old version of ATR_BarColor used fixed strength pivots of 1 bar length, while this new version ; ATR_BarColor_v2 has user defined pivot strenth.
We can see the effect on changin the pivot strength on the following pictures. 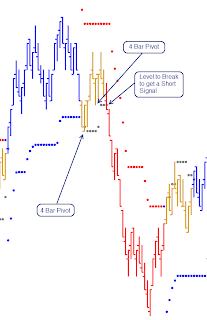 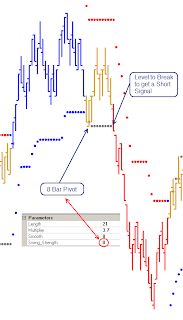 Another change in the logic includes a Fast Move Detection avoiding to wait a pivot creation when the trend change is fast.
This example shows a fast transition from Red to Blue with only 1 yellow Bar : 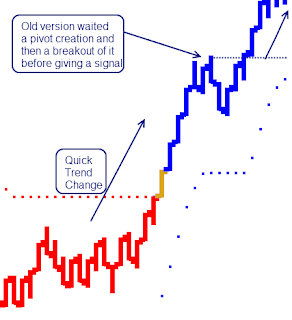 On this example the first Long signal happens at the close of the first Blue Bar.

The updated version of this indicator for Ninjatrader can be found on this link.

Please feel free to post any question or suggestion here...