Ichimoku is a chart developed by Goichi Hosoda, and was originally intended for daily charts. It is intended to find an equilibrium on the charts and uses 2 moving averages ; 9 and 26. The number 26 comes from the number of days that the Tokyo exchange was open per Month. But all periods can be changed and optimized as we will be using faster timeframe charts instead of daily.


Lines of the Ichimoku :

Cloud of the Ichimoku


The Cloud can be used as a Support and Resistance Level ; it has different color depending on the relative position of the Sekou A and Senkou B Lines.

We can use a crossover of the fast and slow lines ( TenkanSen vs KijunSen ) as a trigger signal, and then watch for 2 additional conditions ;
On the following Chart we have an example of a Long Entry on a Standard and Poors ( ES ) Daily Chart : 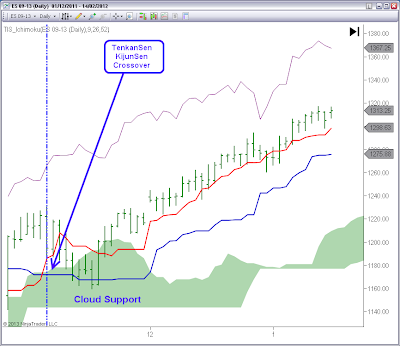 On the following Chart we can see the end of the Trade using a Counter Trend signal of same setup as an exit for the Initial Trade : 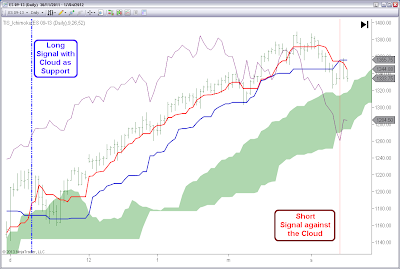 The Cloud is also useful to define the size of the support zone and the stop needed for the trade.

We can also change the default 9,26,52 settings when applying this setup to faster timeframes ; 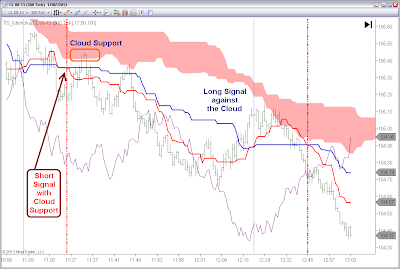 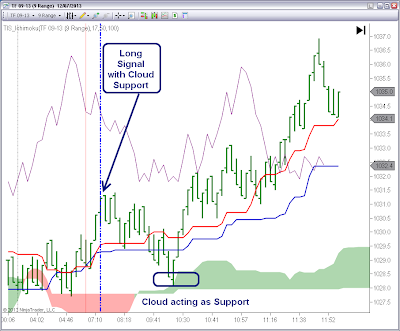